Eastern West Virginia Community and Technical College (EWVC) is a two-year public college with its main campus located in rural Moorefield, West Virginia. Founded in 1999, “Eastern,” as it is often called, serves the six counties of the Potomoc Highlands and has recently emerged as one of the fastest growing community colleges in the state.

With a demonstrated commitment to environmental sustainability—Eastern is one a handful of post-secondary institutions in the eastern United States that offers a degree in Wind Energy Turbine Technology—administrators were keen to explore solar lighting options for their new parking lot. 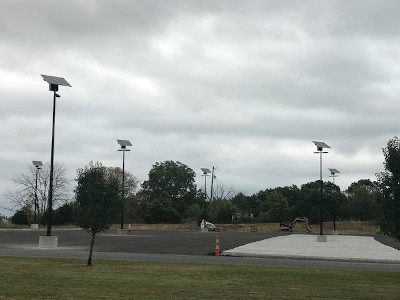 Moorefield’s climate is typical of much of the mid-latitude eastern states, which is to say summers are warm, winters are cold, and there are clouds in the sky more days than not. The number of daylight hours varies significantly over the course of year, with almost 15 hours of daylight on the longest day (June 21) and 9.5 on the shortest (December 21).

LaFace & McGovern and the Sol team conducted a comprehensive site assessment using these numbers and others and recommended nine Evergen M Series systems to adequately light the new parking lot. Each system was equipped with two batteries, two 170W solar panels, and a Dark-Sky compliant LED fixture to minimize light pollution. Additionally, the system was sized to allow for four days of autonomy, to account for unexpected periods of bad weather.

Since being unveiled at an open house at Eastern in November 2018, the new lights have ensured the parking lot remains safe and secure, while affording significant energy savings to the college. Administrators have reported that they are happy with the lighting performance as well as the Bluetooth setup and monitoring capabilities.

The lights have also inspired the college to delve into a number of other solar projects. In December, they developed and hosted a one-day program called Solar on the Farm to educate local homeowners, business owners, and agriculture producers on the benefits of solar energy. And they’ve added a “solar canopy” to the “sustainable parking lot” where Sol’s lights are installed that helps them further offset their electricity costs.  They plan to add a solar-powered vehicle charging station this year.