It’s no secret that the U.S. electrical grid is in dire straits. Over the past several decades, energy production and consumption have risen steadily, placing an untenable burden on a system that was never intended to carry such a sizeable load. According to the American Society of Civil Engineers’ 2017 Infrastructure Report Card, the lower 48 states’ power grid—which was largely built in the 1950s and 60s— is now at full capacity, with many lines operating well beyond their design.

Combine this aging infrastructure with more severe weather events, as well as an increase of vandalism, theft and cyberattacks, and you have a surefire path to frequent and widespread power outages, damaged infrastructure and compromised public safety. During the past three decades, there has been a tenfold increase in major power outages (those affecting more than 50,000 homes or businesses), costing the U.S. economy $150 billion annually.

Fortunately, more and more cities are thinking beyond the grid to power their critical infrastructure, including street lighting. The ability of these systems to remain operational with a reliable, regular source of power in the event of grid power disruption, be it caused by climate change, vandalism or terrorism, is often referred to as “resiliency.”

Numerous sources have noted a lack of consensus when it comes to defining resiliency in the context of infrastructure. Some of this has to do with engineers, city planners, academics and others conflating resilience with reliability, or using the two terms interchangeably.

While related, reliability and resiliency are not one and the same. In the energy sector, reliability can be defined as the ability of the power system to deliver electricity in the quantity and with the quality demanded by users (source). Resiliency, by contrast is the capacity to recover and adapt in the wake of stress. The National Infrastructure Advisory Council defines resiliency as “the ability to reduce the magnitude and/or duration of disruptive events.”

According to resiliency expert Stephen Flynn, there are four essential criteria that comprise a resilient system:

The Department of Homeland Security lays out 16 critical infrastructure sectors, “whose assets, systems, and networks, whether physical or virtual, are considered so vital to the United States that their incapacitation or destruction would have a debilitating effect on security, national economic security, national public health or safety, or any combination thereof.” These sectors include healthcare, communications, food and agriculture, as well as energy and transportation services.

Streetlighting might not immediately strike you as “critical” in the company of things like food and water but consider what would happen if all the streetlights in your city were to suddenly go dark. Not only would drivers and pedestrians not be able to see where they’re going, emergency vehicles would be unable to navigate safely, and theft or violence would likely increase. Considering there are an estimated 26 million streetlights in the U.S. today—the vast majority of which are connected to the grid—a widespread blackout could have a huge impact on urban mobility and safety.

If we consider streetlighting using the same criteria we use for other critical infrastructure—robustness, resourcefulness, rapid recovery and adaptability—the traditional grid-connected approach isn’t at all the ideal solution. Fortunately, stand-alone solar-powered systems, including Sol’s EverGen® M Series Solar Lighting System, offer an alternative: one that allows you to essentially create a self-sustaining “islands,” where your lights can receive power regardless of what’s happening on the grid.

Even though critical infrastructure is largely defined at the federal level, its execution—and its impacts—are borne primarily by municipalities. Here’s how a solar street, trail or parking lot lighting system can help you meet the criteria for resiliency in your municipal lighting projects: 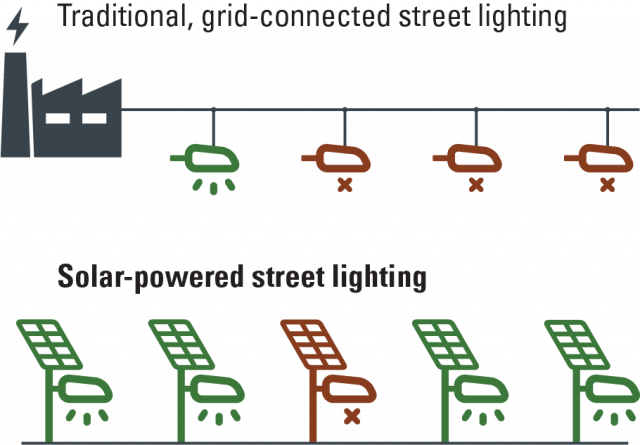 The current grid-reliant method of powering our cities is failing. By choosing off-grid infrastructure and using an independent source of power, cities can keep their lights on and their citizens safe. And that’s what matters most.